USA-based eLux was established in 2016 as a spin-off from Sharp Labs of America, to commercialize a unique MicroLED production technology. The company was in stealth mode for a few years, and is now finally discussing its technology and business. We talked to the company's president and CEO Jong-Jan Lee, who explains the company's technology, status and plans.

eLux's technology is based on a unique approach that moves microLEDs from wafer to the target substrate without the need of a pick-and-place process. The so-called fluidic process uses microLEDs dispersed in liquid and wells built onto the substrate. The microLED dispersion is spread over the substrate and the LEDs simply fall into place - a sort of self-assembly process, which can be seen in the video above.

eLux says that unlike regular pick-and-place processes this does not hurt the microLEDs, and is also highly reliable and cost effective. The resulting displays are very uniform and do not suffer from mosaic defects and other issues.

eLux has developed a lab-scale tool and has already produced several prototype displays. The company is developing tools that would eventually be suitable for 6-Gen production on LTPS substrates. The company is open to license its IP to display makers - but it is also looking into producing its own displays, especially for signage (PID) applications and automotive ones. eLux's current design uses blue microLEDs with QD color filters - but the technology can also be adapted to colored microLED chips (using differently sized wells). 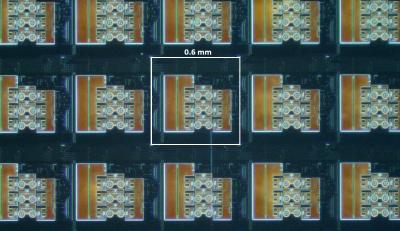 eLux has received a $8 million investment in 2017, led by Foxconn. It was reported that Foxconn acquired the company but that is not correct.