US and Sweden based Glo has been developing Micro-LED displays on both LTPS and CMOS (microdisplay) backplanes for many years. The company has been rather queit until now (even though the 2017 investment from Google created some buzz). 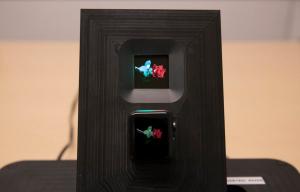 Glo has now started to disclose its technology and achievements. At CES 2019, Glo demonstrated two displays. First up is the 1.5-inch smartphone type display you can see in the image above. The 264 PPI 120Hz display is produced on a LTPS backplane and produces 4,000 nits brightness - you can see how it is much brighter compared to the LGD OLED in the Apple Watch next to it (1,000 nits max).

Glo also demonstrated a MicroLED microdisplay, produced on a silicon CMOS backplane. In this configuration Glo achieves a high density display (1000 PPI) that can produce up to 100,000 nits brightness.

Glo's CEO, Fariba Danesh, explained to us that Glo developed technology that covers the whole aspect of MicroLED design, manufacture and integration - it produces In-Ga-N LED chips that can be placed on either LTPS backplanes or CMOS ones and can scale from 1.8um to 20 um. Glo targets all display types - from microdisplays through mobile displays and up to TV panels. Glo also developed transfer technology - and in total has been awarded over 200 patents.