TCL announced a new AR smartglasses product, which it calls the Thunderbird Smart Glasses Pioneer Edition. TCL did not reveal much, but it says the color display is based on microLED technology, with a pixel pitch of 4 um. TCL did not release any estimated shipping dates or a price for this new product, which is likely still at an early stage.

The video above is not clear, but it seems as if this solution uses three monochrome microdisplays, combined to show a single full-color image (the video shows one panel, but it later shows three monochrome images combined into one full-color display). This kind of solution was suggested by Vuzix, based on JBD's 0.13" VGA monochrome microdisplays. Which incidentally offer a pixel pitch of 4um, which leads us to speculate that TCL is also basing its Thunderbird glasses on JBD's displays. 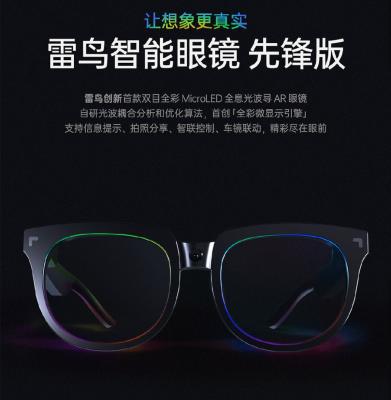 JBD announced its 0.13" VGA microdisplays in March 2020 - which it says is the world's smallest microdisplay. The JBD4UM480P microLED display is a monochrome 640x480 0.13-inch display, that offers a brightness of 2 million nits (green), 200,000 nits (red) or 150,000 nits (blue), with a power consumption of a few hundred milliwatts under average operation conditions.

If you want to learn more about the MicroLED (and OLED) microdisplay market and industry, check out our MicroLED and OLED microdisplays Market Report.