LG Display, based in Korea, is one of the world's largest display makers. LGD produces screens for TVs, laptops and mobile devices.

LG Display's high-end TV technology of choice is WRGB OLED, but the company announced in 2018 that it is also developing Micro-LED TV technology, and in 2020 the company launched its MAGNIT range of tiled MicroLED TVs.

LG Electronics will soon launch its first microLED TV. These are tiled TVs, made from seamlessly connected 640x360 tiles - these are similar TVs to what is available today from Samsung, Sony and Konka. 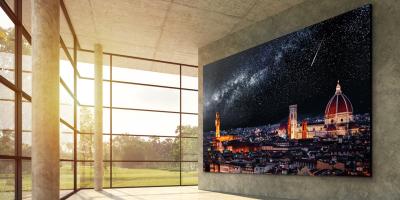 These new microLED TVs will likely target the commercial market and also ultra-premium residential installations - and will be LG's flagship TVs. LG will be selling these under its business solutions unit, and it seems as if it will start shipping in August 17, 2020.

At the InfoComm 2019 US trade-show, LG Display unveiled a new 8K Micro-LED display. We do not have a lot of information about this display, only that the pixel pitch is 50 microns.

LG Display unveiled its first Micro-LED TV prototype in August 2018, a 173" TV. The company did not yet discuss the technology readiness of its Micro-LED displays.

As promised, LG unveiled its first Micro-LED TV prototype at IFA 2018, you can see the gigantic 173" TV in the video below.

LG indeed said that its first Micro-LED TV will indeed be larger than Samsung's 146-inch modular Wall. But Samsung's design is modular, and also Samsung seems to be more advanced as it started accepting pre-orders in June 2018 and will soon ship its Micro-LED TVs for commercial applications.

In January 2018 Samsung unveiled its first Micro-LED TV, the 146-inch modular Wall, and started accepting pre-orders in June 2018. In February, Samsung's rival LG said that it is developing its own Micro-LED TV and it was rumored that it will unveil its first prototype in September 2018.

In a new report, the Korea Herald now claims that LG is indeed on track to reveal the first TV in September 2018 (at the IFA conference in Germany, which actually starts on August 31). LG's first TV will be larger than Samsung's demonstrated device at 175-inch. Samsung's TV however is modular, so it can be made larger. It is not clear whether LG's Micro-LED TV will have the same design.

In early 2018 LG Display announced that it is developing Micro-LED displays, for large-area TVs at first. It is now revealed that LGD filed for three new trademarks in the EU, and all three seem to be related to microLEDs: XÂµLED, SÂµLED, and XLÂµLED.

The Korea Herald reports that Apple and its subsidiary LuxVue Technology applied for over 30 Micro-LED patents in Korea in the past 10 years. As Apple's Micro-LED project is progressing, the company aims to prevent its competitors in Korea (mainly Samsung and LGD) from using its key Micro-LED technology.

According to the report, Apple applied for 11 patents directly, while LuxVue applied for 23 patents. LuxVue was acquired by Apple in 2014. Apple applied for patents that related to the Micro-LED chip structure, the pick-and-place process and the driving system.

According to Business Korea, LG Display aims to unveil its first Micro-LED TV in September (based on LG Innotek's Micro-LEDs). LGD's TV will be larger than Samsung's 146" Wall.

LG Display sees several technical challenges ahead before it could launch such a display commercially - and it also has concerns regarding the production costs of huge MicroLED TVs. In the meantime the company is focused on its OLED TV technologies.