MicroLED can be applied to displays of many kinds - from small displays for smartwatches and AR devices to large-area TV displays. MicroLED displays are often compared to OLED displays - the main display technology that it is rivaling.

What is an OLED?

OLED is the current premium emissive display technology, already adopted in many mobile devices, wearables and even TVs. In 2020 around 500 million OLED displays will ship to companies such as Samsung, Apple, LG, Sony and others. OLEDs can be made flexible, foldable and even rollable and the displays offer the best image quality currently in production.

OLEDs use tiny sub-pixels made from organic emissive materials. Micro-LEDs are somewhat similar - but with an inorganic LED structure. Compared to OLEDs, Micro-LEDs promise to be much more efficient and bright, more durable (higher lifetime) and with a higher color gamut, mostly due to the superior performance of LEDs over their organic counterparts.

The following table shows a comparison between OLEDs and MicroLEDs (it also details mini-LEDs and regular LCDs): 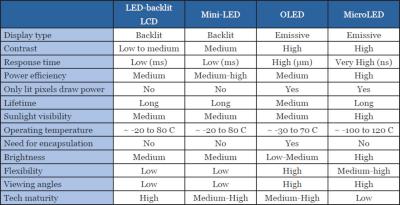 As can be seen, microLEDs has the potential to beat OLEDs in most metrics, including power consumption, lifetime, brightness, temperature range and response time. MicroLED technology is not mature yet, and there are still challenges on the way towards commercialization.

The latest MicroLED and OLED news:

We are happy to announce the new edition of The OLED Handbook, the most comprehensive resource on OLED technology, industry and market - now updated for 2022. The OLED industry grows and changes very fast, and the new edition include new details on the OLED mobile display market, the new production lines being established, foldable and rollable OLEDs, the Coronavirus outbreak effects and more! 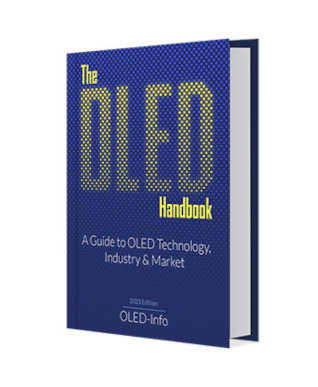 Reading this book, you'll learn all about:

The OLED handbook has been read by hundreds of display engineers, business developers, researchers, equipment vendors, OLED material companies, private investors and others who wished to learn more about OLEDs today and in the future. I truly believe that it is the best introduction to OLED displays and lighting!

Metalgrass (MicroLED-Info) is now offering a new subscription service for enterprises that want access to our complete collection of market reports.

For $3,500 per year, you will get an Enterprise License to all of our market reports. Metalgrass currently offers 12 market reports, plus 4 handbook guides, and all of these are included in the subscription (bought separately, these will cost over $10,000!). You will also have access to all new reports, updates and guides released in the future (during the yearly subscription period).

Our Enterprise License gives access to your entire organization: you can share the report with all the company employees via mail, shared server or any other digital way.

In the following interview, we discuss the company’s technology and business with its CEO, Myunghee Lee.

Q: Hello Mr. Lee, thank you for your time. Can you give us a short introduction to SAPIEN and your microLED technologies?

SAPIEN specializes in developing CMOS Backplane SoCs (System-on-Chip) for Micro-LED display applications. SAPIEN was founded in 2017 by industry veterans who have over 230 years of combined design experience in Display Driver ICs (DDI).

The MicroLED and OLED Microdisplay Market Report updated to July 2021

MicroLED-Info is proud to announce an update to our MicroLED and OLED Microdisplays Market Report. This market report provides a great introduction to both MicroLED and OLED microdisplays, and covers everything you need to know about next-generation microdisplays. This is a great guide if you're considering to adopt microdisplays in your product and if you want to understand this industry better. The report is now updated to July 2021. 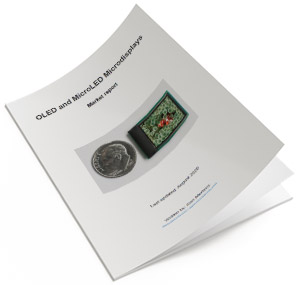 This market report covers everything you need to know about next-generation microdisplays. This is a great guide if you're considering to adopt microdisplays in your product and if you want to understand this industry better.

MicroLED displays show great promise, as the technology enables emissive displays that can offer performance on par with OLED displays and higher brightness and efficiency. In addition, these displays can offer higher lifetimes and less burn-in. 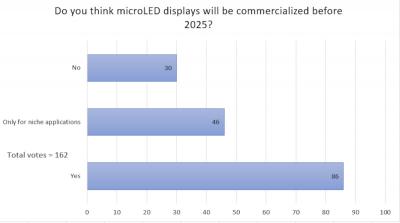 However, the production of microLED displays is still very challenging - with many issues that are yet to be resolved - around the LED epiwafer growth, the transfer process, RGB backplanes, inspection and repair, and more. Even after billions of dollars that have gone into microLED display technologies R&D, display makers are not ready for actual mass production.

The US NSF grants $256,000 to Amorphyx to demonstrate its AMeTFT backplane for OLED and MicroLED displays

US-based amorphous-metals based display backplane developer Amorphyx was awarded a $256,000 US NSF SBIR phase I grant towards a proof-of-concept demonstration of the company's 211 pixel circuit for AMOLED and microLED applications.

Amorphyx says that its 211 pixel circuit leverages the unique properties of the AMNR and IGZO AMeTFT device technologies to both improve upon the variable image refresh rate and power consumption improvements of LTPO while dramatically simplifying the pixel circuit's functionality and manufacturing. The Amorphyx backplane meets and exceeds LTPO performance while eliminating the LTPS TFT technology that drives the complexity of manufacturing LTPO backplanes.

This is a guest article by IdeaFarm LLC

A potentially key advantage for microLED displays is the ability to effectively integrate far-field image sensing within the display because of the large “open” pixel area compared to other display technologies. The basic feasibility and advantages of integrating far-field image capture within a microLED display was reported on by IdeaFarm LLC at the recent Displayweek 2021 conference (the major worldwide display technology conference). IdeaFarm proposes to integrate an array of miniature wafer-based camera chips, “microcameras”, on the same substrate as microLEDs as part of the display manufacturing process (see diagram below for an illustration of the concept). Advanced real-time image processing is used to form high-resolution video by combining lower resolution video streams from multiple microcameras. 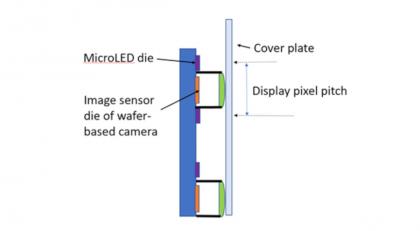 Because of the recent increased attention to improving the videoconferencing experience and the ongoing drive to eliminate bezels and display cut-outs in mobile phones and other devices, interest in including image capture inside displays is growing rapidly. The number of technical papers presented at Displayweek related to including image capture inside the display grew from essentially zero in 2019 to eleven in 2021. So far, under-screen or under-display cameras have been demonstrated in mobile phones with OLED displays, but only one brand is actually shipping and the tradeoffs in image quality and visibility of the camera zone have been noted.

DSCC: microLED microdisplay shipments will remain low even in 2026

DSCC says that the AR and VR markets are set for quick growth, and display sales for AR and VR devices will grow at a CAGR of 52% between 2020 and 2026, to reach $4.2 billion in sales (up from $347 million in 2020). This forecast does not include military applications.

The main bulk of the market will remain displays for VR, as actual see-through AR will remain a relatively small market even in 2026. DSCC see microLED technologies providing a breakthrough in this market, but actual microLED display shipments will remain low, around 5%. The market will be dominated by OLED microdisplays.