LED devices are quite efficient. In the chart above (by the DoE), you can see that the efficiency (external quantum efficiency, or EQE) of a blue LED is around 70%. It is generally accepted that as LED chip size decreases, the efficiency of LED devices decreases as well.

One of the reasons for the lower efficiency of microLEDs is sidewall defects, which are generated during the etching process of the LED chips. As the LED chips get smaller, these defects have a greater effect on the internal quantum efficiency (IQE) of the LEDs. These defects and other issues reduce the amount of light that is being output from the chip - and so the external quantum efficiency (EQE) is also lower of course.

There are several methods to increase the EQE of LED devices. For example one can add a reflection film on the bottom of the device. It is also possible to introduce light extraction structures on the LED chip itself. Some of these methods are in use today with LED chips, but adopting these methods on small microLEDs is an engineering challenge - which will hopefully be solved in time. It is believed that eventually the EQE of microLED devices could approach the EQE of regular LEDs.

According to our talks with industry experts, current blue GaN LED EQE is around 30%, while with added reflection films it can reach 35-40%. Interestingly the microLED EQE depends on the production process, and also on the LED material. Researchers have shown that different LED colors exhibit different EQE properties - and actually the optimum chip size is not the same for all LED colors. This could mean that for RGB microLED displays the optimal design will use chips of different sizes for each color, to attain the maximum display efficiency. 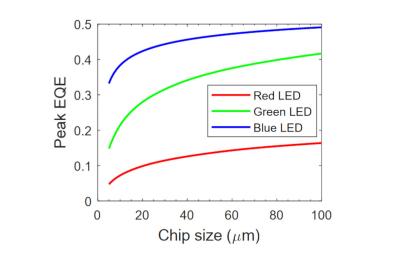 The efficiency of blue LED devices is the highest of all RGB colors, and the efficiency of red microLED is especially low. Some believe that this will make the case for a blue-LED with color conversion architecture more attractive, in addition of course to the simpler device structure and transfer process.

To prepare this short article, we consulted with some industry experts, which we would like to thank. Stay tuned for our next article which will discuss the efficiency of the whole microLED display.