Yole Developpement published an interesting article discussing the patent landscape of the MicroLED industry. As of today, almost 1,500 MicroLED patents were filed by 125 companies and organization. The overall corpus has an average of 3.2 years, which makes these patents quite new. 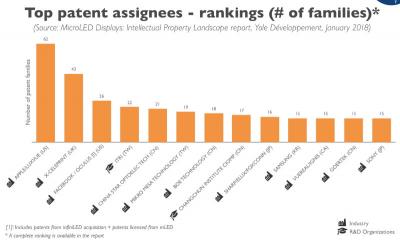 The initial micro-LED patents, filed at around 2000-2001, were mostly by a variety of research institutes, by large companies such as Sony and Sharp but also by startups such as Luxvue (acquired by Apple). The activity in this field is still led mostly by startups, and with the exception of Sony and Sharp, mature display makers are relative latecomers.

As of December 2017, Apple appears to have the most complete IP portfolio, covering almost all key technology nodes. Other companies like Sony, with a smaller portfolio but which had a head start, might own more fundamental design patents with strong blocking power.

Yole estimates the multitude of players in this industry with patents across many technology areas will lead to complex licensing and legal battles once Micro-LED displays enter volume production and enter the market.

Looking to the future, Yole believes that initial success in smartwatches could accelerate technology and supply chain maturation, making microLED competitive against OLED in high end TVs, tablets and laptops. In Yole’s most optimistic scenario, the market for microLED displays could reach up to 330 million units by 2025.