» LEDinside publishes a Micro-LED technology and...

TrendForce's LEDinside published a new roadmap for Micro-LED technologies and applications. According to the company, mini-LED and micro-LED revenues could reach $1.38 billion by 2022, and $2.891 by 2025. 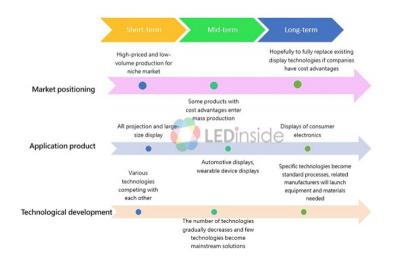 LEDinside sees Micro-LEDs restricted in the short and medium terms to niche and premium displays such as large format displays and microdisplays, which means that total display shipments will not be larger.

In the short/medium terms (the next 3-years), Micro-LED could find applications in AR projection, signage and TVs. All of these segments will enjoy the high brightness and high efficiency of Micro-LED displays, and especially in very large area, Micro-LED could be cost effective when used in a tiled architecture.

For the AR market, the high efficiency and brightness will be attractive, and Micro-LEDs will capture a 18% market share by 2025 (720,000 displays out of a 4 million total market).

In the longer terms, Micro-LED develops will have to drastically lower production costs and increase production efficiencies if Micro-LEDs are to compete with mainstream displays (OLEDs and LCDs). The two main challenges are the production costs of Micro-LED wafers and the mass transfer process of micro-LED chips.