Researchers from Korea's Electronics and Telecommunications Research Institute (ETRI) developed a new process to produce microLED displays, which they say can be highly cost effective. 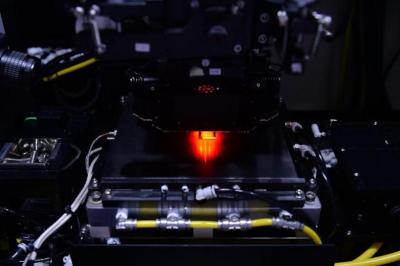 The new process is based on a novel film-like material developed at ETRI, called SITRAB. Using lasers, the process apparently detaches the microLED from the original epiwafer and bonds it to the SITRAB film in the same process step. The LEDs are then transferred to the final target backplane.

Apple's latest iPad Pro tablets use a mini-LED backlit LCD (which Apple refers to as Liquid Retina XDR). While most reviews of the new display are quite positive, some users are complaining of "blooming" - the edges of bright objects on dark backgrounds tend to 'bleed' as the dimming zone is not small enough.

miniLEDs improve over LCD as they introduce thousands of dimming zones, which increases contrast and improves power consumption. The dimming zones, however, are sometimes not small enough, as some users find out, and cannot compete with an emissive technology such as OLED or microLED.

China-based display maker Royole introduced a stretchable and transparent microLED display prototype at SID Displayweek 2021. The company says that this display, the first of its kind, is compatible with existing industrial manufacturing processes.

Glo has been developing GaN microLED displays on both LTPS and CMOS (microdisplay) backplane. The company, founded in 2003, has invested (according to Nanosys) over $200 million in its technology - which includes epitaxial LED growth, transfer technology and chip processing.

Vuzix says that samples of the new engines are now available upon request. These are monochrome devices, and one would have to use three (red, green, and blue) for a full color display. Vuzix is developing full-color and higher-resolution (HD) engines. Vuzix says that its next-generation smart glasses will adopt these devices which are now on offer to customers.

The first display is a 89-inch 5K (59 PPI) curved display, produced from tiled microLED panels. The display has a 32:9 aspect ratio with the microLEDs driven by PCB. The 89-inch display is build from 168 tiles, and it achieves a brightness of over 2,000 nits.

Tianma demonstrated several new microLED display prototypes at SID Displayweek 2021. First up is a 7.56" 720x480 (114 PPI) flexible MicroLED display, developed in collaboration with PlayNitride. The display is driven by an LTPS backplane and achieves a brightness of over 600 nits. The bending radius is 50 mm.

The second display is a tiled display that combines two 5.04" 480x320 (114 PPI) LTPS microLED displays. This one was develop again in collaboration with PlayNitride. The border (bezel) of the panel is less than 0.03 mm - although looking carefully at the display you can see a black line separating the two panels.

AUO Optronics is showing its latest microLED ALED display prototypes at SID DisplayWeek 2021. Most of these aren't new display (AUO already demonstrated these last month) but it's the first time we got these on video:

3D-Micromac announced a new microLED mass transfer tool, called microCETI. The company says its new technology can be used to transfer over 130 million microLEDs per hour.

MicroCETI is based on a laser-induced forward transfer (LIFT) process that can support almost any microLED material and shape. The tool also includes optional modules - a laser lift-off (LLO) module, and a single LED die repair module.

GE and Current Lighting Solutions have signed a collaboration agreement on small-size Potassium Fluorosilicate (PFS/KSF) phosphor for MiniLED and MicroLED applications. The two companies have a long-standing relationship in the world of PFS/KSF phosphor, and this new agreement extends their previous agreements.